Exquisite Polycule: True Love Edition is a polyamorous romantic comedy tabletop storytelling game. It tells the story of how a group of wacky characters becomes a polycule— a network of non-monogamous relationships. Characters are created collaboratively, and their story is played out in a five-act structure while their relationships are tracked on a web. The original “Exquisite Polycule” (now available for free!) was published in volume 4 of the San Jenaro Co-op’s Short Games Digest. True Love Edition is an expanded edition which streamlines character creation and provides more detailed scaffolding for your story. True Love Edition was funded through Kickstarter's Zinequest event in 2021.

How does "True Love Edition" differ from the original?

The biggest improvement in Exquisite Polycule: True Love Edition is the character creation process. Characters in both editions of the game are built collaboratively from lists of attributes written by the players. In the original Exquisite Polycule, this process uses six-sided dice to randomize the characters' attributes. True Love Edition makes this randomization optional and allows for quicker and more precise character creation by trimming the attribute lists based on the number of players at the table.

Furthermore, True Love Edition expands on concepts such as:

Georgie Bats is a queer/trans anarchist writer and game designer from the US. S/he writes lyric games, story games, supplemental material, and "thought experiments for adults who play pretend."

Loren Ponder is an illustrator and comic artist from the US. Their work weaves together themes of queerness, disability, and fantasy: depicting people, nature, and creatures using bright colors and bold lines.

Fen Slattery is a digital accessibility advocate and zinester in Chicagoland. They combine their background as a copyshop grunt and a child of the Geocities era to make beautiful and weird and ugly and meaningful things.

Marx Shepherd (they/them) is a tabletop roleplaying game designer, editor and project lead, as a freelancer and for the San Jenaro CoOp. They also host Yes Indie'd Pod, an indie TTRPG interview show, and organise the in*die zine. They're unashamedly narrativist and believe strongly in games that tell stories about real societies and people.

Catherine Liao is a Filipino sensitivity reader with a background in writing fantasy and historical fiction. When not reading or writing, they can be found gaming, boxing, or taking up ancient languages. They’re currently studying to become an archaeologist.

In order to download this game you must purchase it at or above the minimum price of $10 USD. You will get access to the following files:

Support this game at or above a special price point to receive something exclusive.

If the price of Exquisite Polycule: True Love Edition is a hardship to you, please take one of these free community copies that have been provided by kickstarter backers. 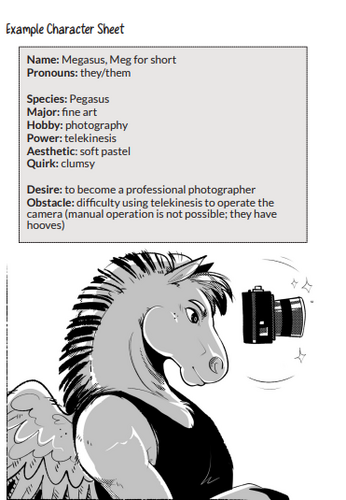